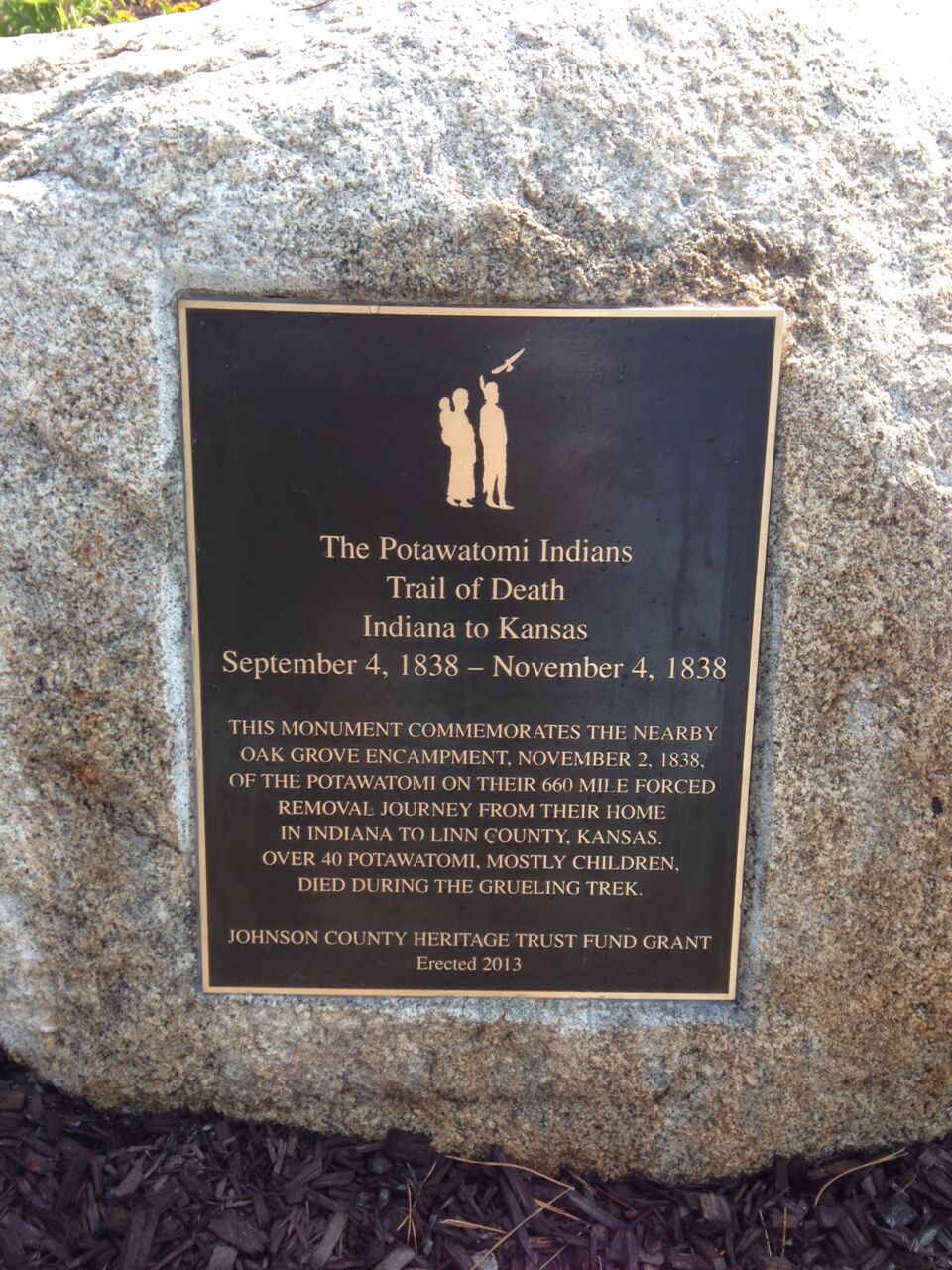 The monument, dedicated in 2013, is near the spot the Potawatomi tribe is believed to have camped in Johnson County on the Trail of Death march from Indiana to Osawatomie, Kansas. It sits by the marina in Heritage Park in Olathe and is accompanied by nearby wayfinding signs in Olathe and Overland Park that mark the trail. 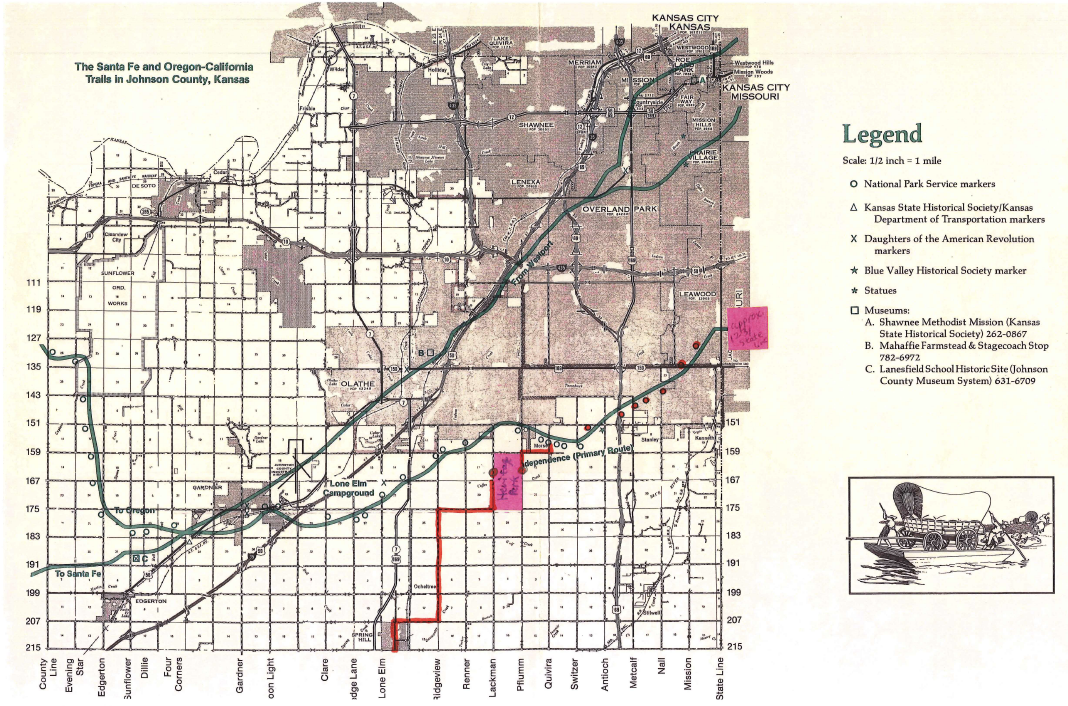 This map shows the approximate journey the Potawatomi tribe traveled through Johnson County on the Trail of Death in 1838. The red line marks the vehicle route.

A monument in Heritage Park marks what is believed to be an historical point on the Trail of Death the Potawatomi tribe was forced to march during their forced relocation in the 1800s following the Indian Removal Act of 1830.

The process to get the monument there — in what is now believed to be a more accurate location — took time and the correction of a misstep, superintendent of the Johnson County Parks and Recreation Department Bill Maasen says.

This isn’t the first marker in Johnson County to identify the historical event. In fact, Maasen said a previous one located on private property is thought to have misidentified where the tribe camped in the area. Back in 2011, an educator from the Spring Hill school district approached the parks department saying, after some research into the history, she believed the original monument was actually inaccurate. These findings were supported by the Spring Hill Historical Society.

“The thought was based on some diary notes from individuals who are members of the tribe that walked the Trail of Death in 1838, that they camped somewhere near the community of Morse, which is just northeast of Heritage Park,” Maasen said.

These records indicate that the 860 or so members of the Potawatomi tribe traveled the route of the Santa Fe Trail pretty closely, which also passes through Heritage Park.

“So JCPRD took it upon itself to do a little work and commemorate the route on our property,” Maasen said.

After an application was filed in conjunction with the Potawatomi Trail of Death Association for money to rebuild the monument, the Heritage Trust Fund issued a grant covering the cost of the project plus the extra cost of wayfinding signs. These street signs are posted in Olathe and Overland Park to indicate other parts of the route in southern Johnson County at 160th Street, Pflumm Road and Lackman Road.

Ahead of old courthouse demolition, officers found old trial materials that told a story from the past

Before the demolition on the old Johnson County Courthouse got underway earlier this year, L…

“People can follow the vehicle route for the Trail of Death,” he said.

In all, it cost about $6,000, the majority of which was covered by the Heritage Trust Fund.

Finding a new home for the monument seemed necessary anyway because the person who lived on the property “wouldn’t let anybody come sit by” or reflect at the monument, Maasen said. Additionally, when the county offered to remove the monument after learning it marked the wrong location, the property owner declined.

“Long story short, the person who lived there wasn't being cooperative,” Maasen said.

An old monument still remains on that private property near 215th Street and Stateline Road.

The newer, more accurate monument is a granite boulder with a brass plaque indicating that the tribe stayed at the nearby Oak Grove Encampment in November of 1838 toward the end of the two-month journey from Indiana to Osawatomie, Kansas.

It was formally dedicated in 2013 ahead of the 175th anniversary of the Trail of Death. A press release sent out at the time of the dedication says 41 members of the tribe died on the trail, most of them children. They died “from the stress of the march or from typhoid fever caused by the lack of good clean drinking water along the trail.”

SHARING MORE HISTORY IN THE PARKS

Massen said in the last few years there’s been a push to get more historical context reflected in the parks, and that could materialize in different ways. One case is the Trail of Death markers and monument near the marina in Heritage Park.

“Probably the best thing we can do,” Maasen said, “is to put stuff up about the history and then maybe it'll attract some attention.”

Other parks across Johnson County may also start to see more communication about their history. Something that may pop up more are “interpretive panels,” he said, which could tell citizens who use the parks more about the history of their naming or historical moments that took place in or are connected to that property. For example, JCPRD unveiled John Barkley Plaza in Shawnee Mission Park, which commemorates a World War I veteran who is considered the father of the county park system and the first JCPRD superintendent.

Maasen said residents can expect to see more installments like that pop up.

“In a way, we're trying to introduce history into our parks so that when you're out in the park you can learn a little bit,” he said.

Indian Creek Trail, which travels through Olathe, is included in the MidAmerica Regional Council’s official “plogging” day planned for this weekend.